\It’s crazy even to be saying this, but it almost feels like September was a quiet month.

I guess it’s relative. The political unrest remains critical. Kidnapping and violence are still daily occurrences, but no major natural disasters rocked the country this month, and our admissions slowed a bit from the staggering numbers we saw in August. We are still anticipating record levels of patients will be treated before the year is up, but in September, we “only” admitted 14 (compared to the 20 from last month) new babies.

The kids currently filling the beds in our inpatient unit are in various states of healing. Some are already sporting chunky cheeks and sweet smiles, while others are in the agonizing early days. Healing is coming, but not without a lot of pain and hard work. This month we were reminded yet again just how fragile these little ones are when a precious little girl named Merline died from malnutrition less than two weeks after being admitted for treatment. She was barely two years old.

Every day we witness the collision of suffering and miracles. There are a million reasons to give up, but even on the darkest days, we are greeted by dozens of little faces each morning to remind us that the good is conquering the bad. Meet the little ones that have kept us going this month.

On the first of September, we started the month with 4 admissions in just 24 hours. The first was a 2-year-old boy, “D". D comes from an area deep in the mountains several hours from Middle Ground. He and his mama, Dieusimène, had been referred to us by one of our partner organizations, Chances For Children, who run a feeding program in his village. Their staff recognized the symptoms in D and encouraged his mama to bring him to Middle Ground. On the day of his admission, D weighed 15lbs 2oz and was diagnosed with kwashiorkor. When he was admitted, D had been sick off and on for about six months. On the day before he was admitted, D had not had anything to eat. On the day of his admission, he ate nothing until he arrived and was started on F75 milk. D is fighting for healing with his mama Dieusimène by his side. 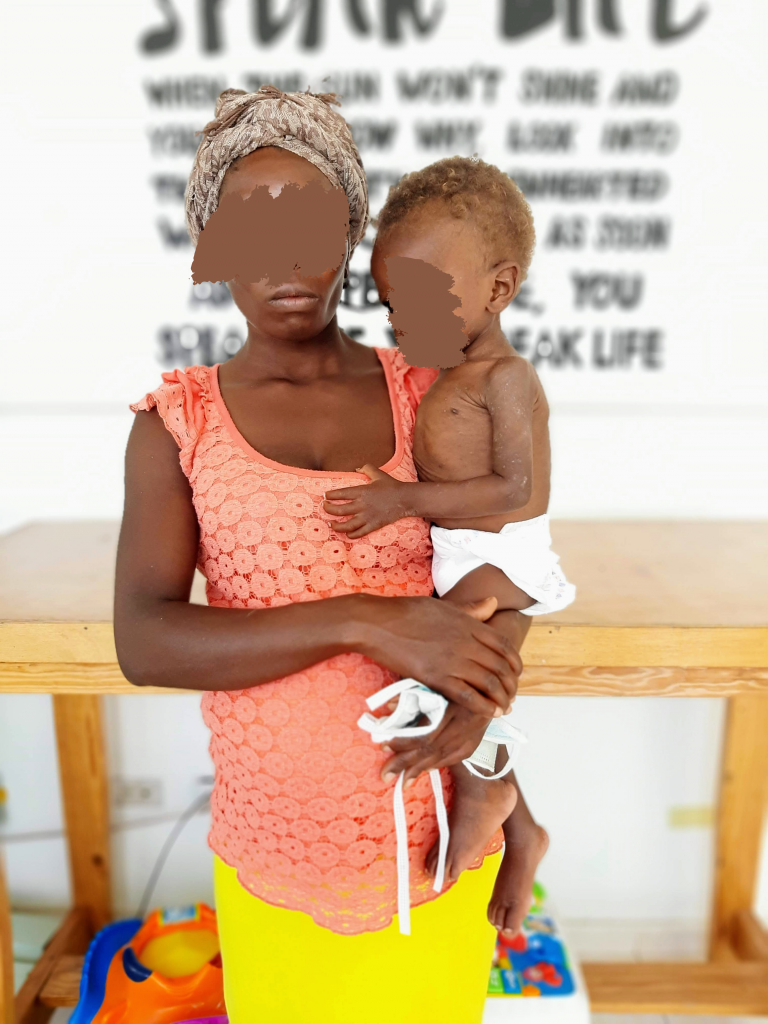 Also admitted on September 1st was 2-year-old Merline. This sweet girl was also referred to us by Chances For Children. Merline was swollen from kwashiorkor and severely anemic to the point that she needed a blood transfusion. Because of the advanced level of care she required, she was transferred to a local hospital with capabilities to get her the blood that she needed, but unfortunately, her body had been weakened beyond what she could recover from, and on September 12th, Merline died of complications of severe malnutrition. She was two years and 3 weeks old. 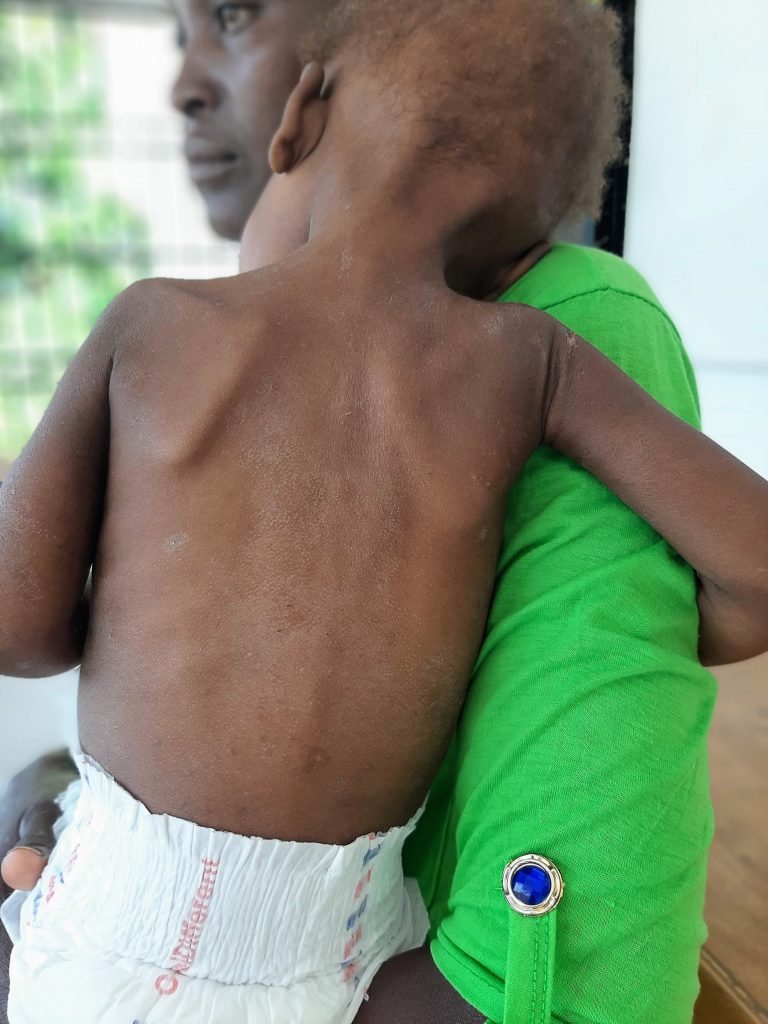 Our 3rd admission on the 1st was 11-month-old baby E, who weighed 16lbs 1oz and was diagnosed with kwashiorkor. J has been sick for two weeks with a fever, cough, and diarrhea. E’s mother died giving birth to him, and his aunt, Edeline, is his primary caregiver. Edeline traveled about 5 hours, leaving her other children at home in the care of other family members, to bring E to Middle Ground. She is staying by his side throughout this treatment. 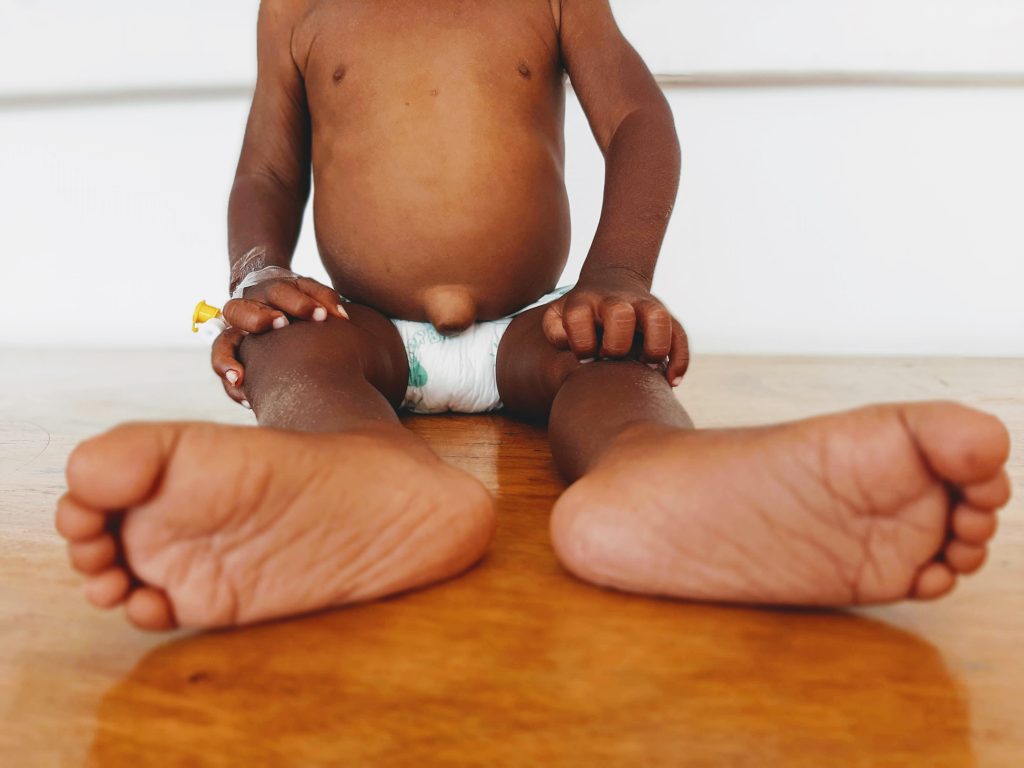 Finishing our admissions on the 1st was 14-month-old “M”. M was brought to us by his mama Donia. They traveled about 15 minutes by taptap to arrive at Middle Ground. On the day of his admission, M weighed 16lbs 13oz, he had eaten flour porridge that morning, the day before he had a bowl of broth. M was diagnosed with severe marasmus. M was treated with F75 milk for ten days before graduating to medika mamba treatment. 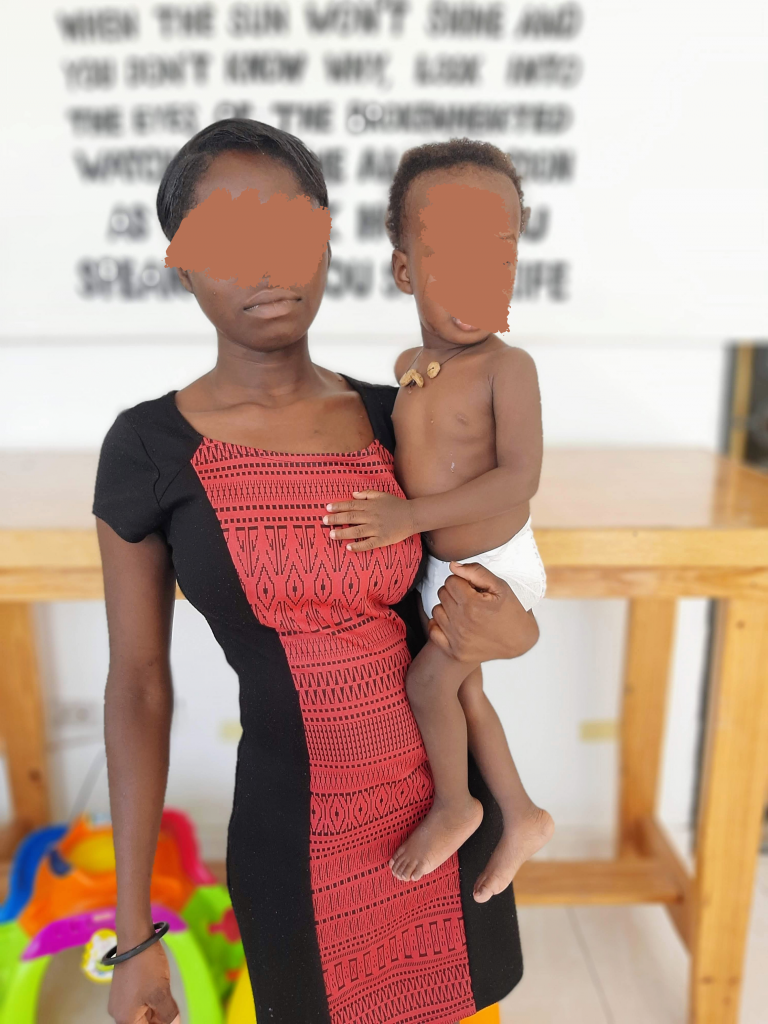 Two days later, on September 3rd 14-month-old “W” was admitted after being diagnosed with kwashiorkor. He weighed 13lbs 5oz. W had been sick since he was about seven months old with chronic diarrhea and a cough. W and his mama traveled about 45 minutes to arrive at Middle Ground. The day before he was admitted, W ate a jar of baby food, and on the day of his admission, he had only a cup of water. D’s mama, Stamania is staying with him during his treatment. 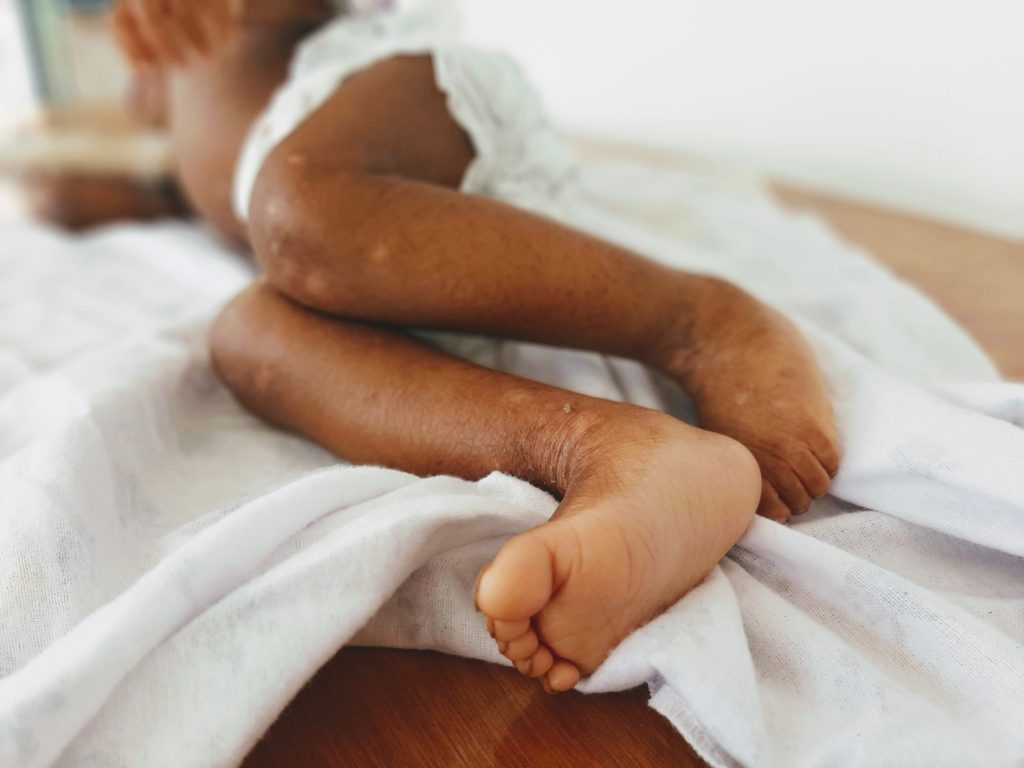 On September 6th, everyone in the center was shocked at the sight of a 3lb 14oz 3-month-old baby boy, “D”. D was born prematurely and released from the hospital within 12 hours, even though he weighed less than 3lbs. It’s an absolute miracle that his dedicated mama, Nadège, was able to keep him alive for over three months, even though he was too weak to eat properly. She had fed him a thin flour porridge to supplement the little breastmilk he was able to consume. D and Nadège heard about Middle Ground from the parent of one of our previous patients, and they traveled about an hour by taptap to arrive at our center. 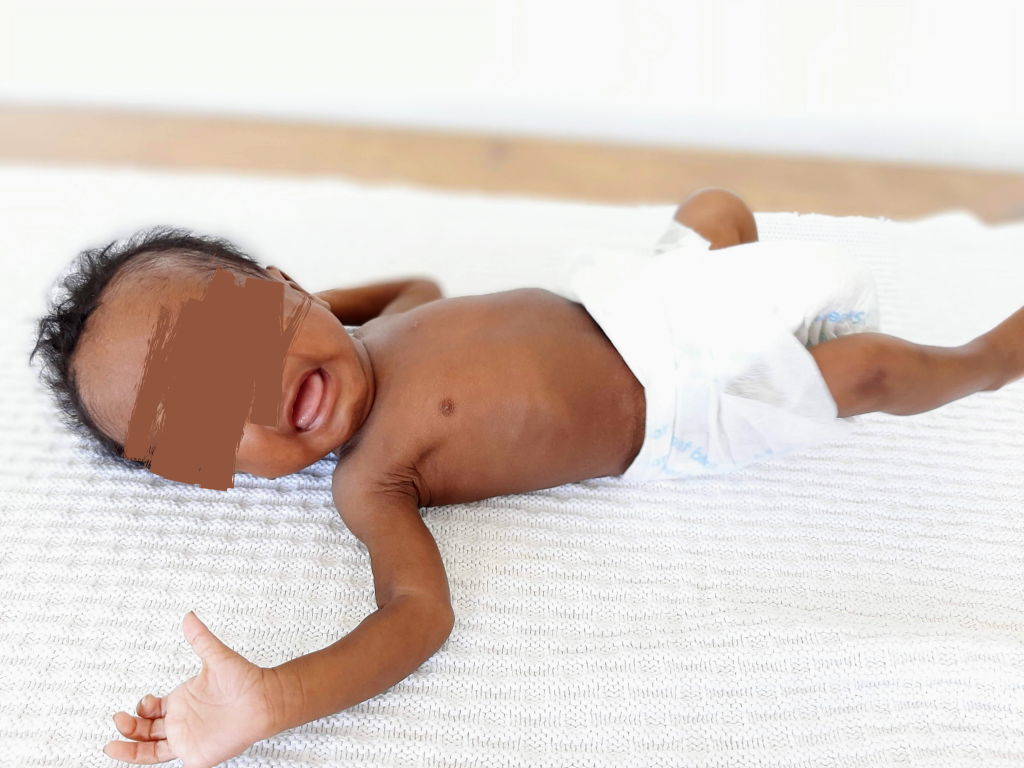 On September 9th, we readmitted one of our previous patients, 14-month-old “N” N weighed 13lbs 12oz and had just begun to swell with kwashiorkor for the second time. N’s mother is in the hospital, and her auntie, Michelenne, is staying with her at Middle Ground. 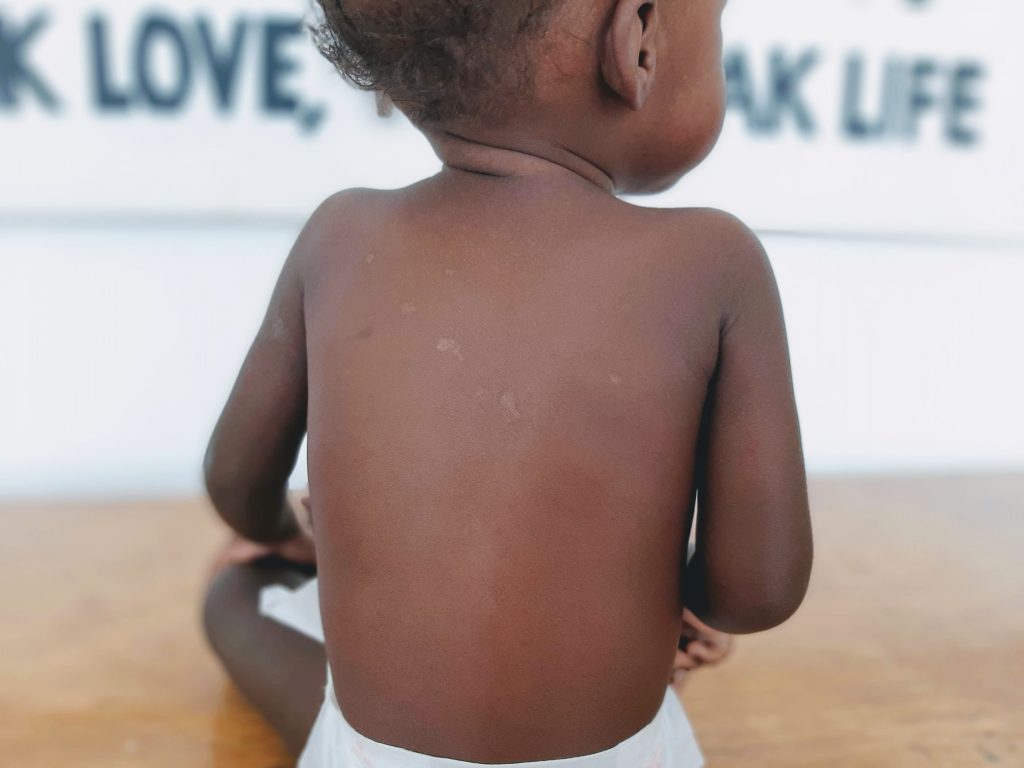 Also admitted on September 9th was 2-year-old “W”. W had been sick for about 11 months with chronic fevers and diarrhea and was diagnosed as moderately malnourished. He weighed 12lbs 10oz. W and his mama Christelle were welcomed by our staff and quickly stole everyone’s hearts. We can’t wait to watch W continue to transform as he rapidly changes and recovers. 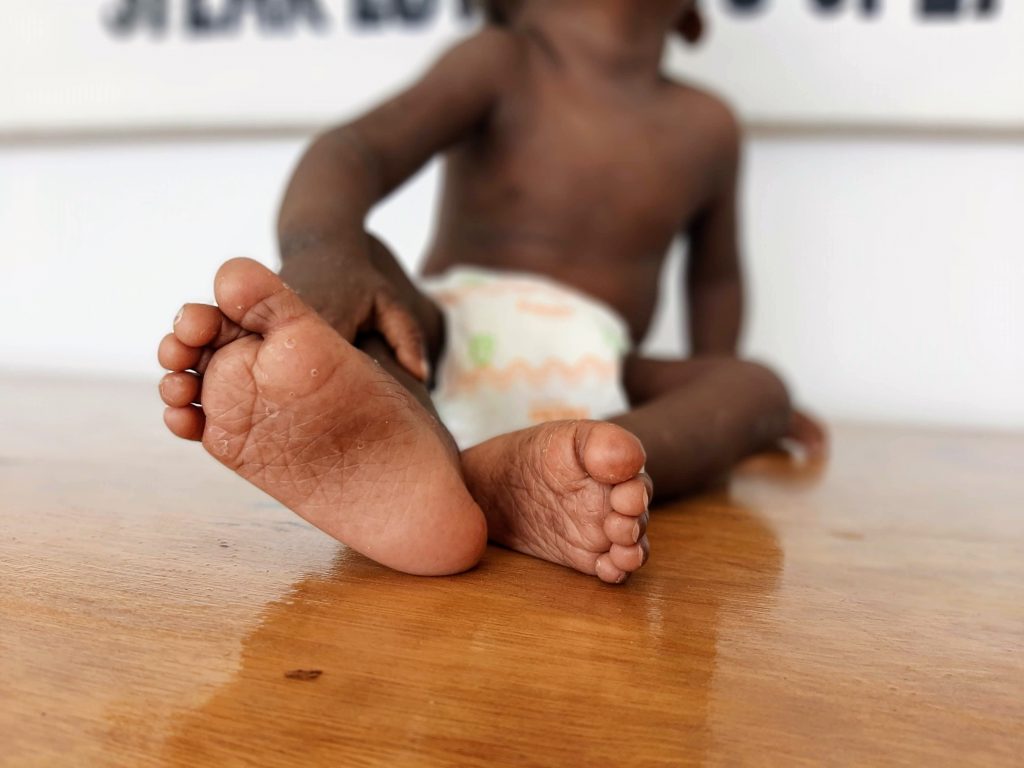 On September 17th, 20-month-old “O” arrived at Middle Ground in his mama, Manoucheca's arms. He weighed 18lbs 10oz and had swelling. He was diagnosed with kwashiorkor. Manoucheca had brought O on the 2-hour journey to Middle Ground at the urging of a neighbor whose child had been treated in our programs preciously. The family’s situation had been incredibly hard for quite a while, and in early August, O began to lose weight and get sick. On the day before O was admitted, he had boiled plantains to eat, and on the day he traveled to us he had eaten a package of crackers. O is the youngest of Manoucheca’s 2 children. 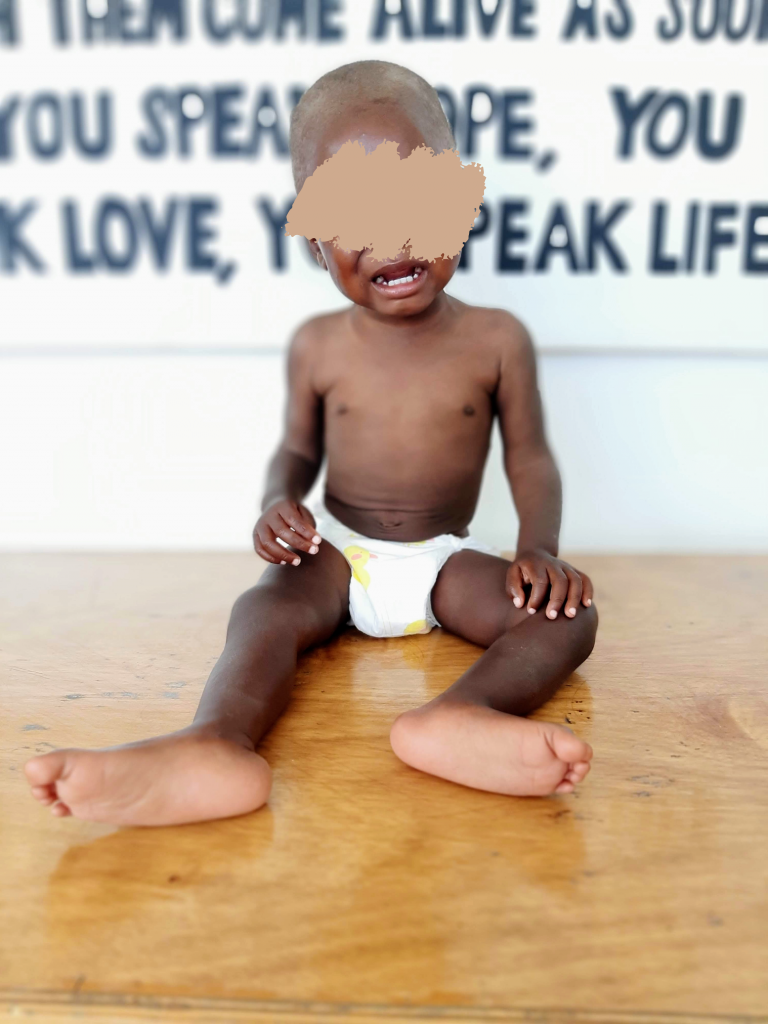 Six days later, on September 23rd, 2-year-old “M” traveled nearly 7 hours in the arms of his mama Rosemene to seek treatment at Middle Ground. M weighed 26lbs and was severely swollen from malnutrition. M is the youngest of Rosemene’s living children, and she has also had two children pass away. On the day that M was admitted, he had eaten only a bit of bread and some water. 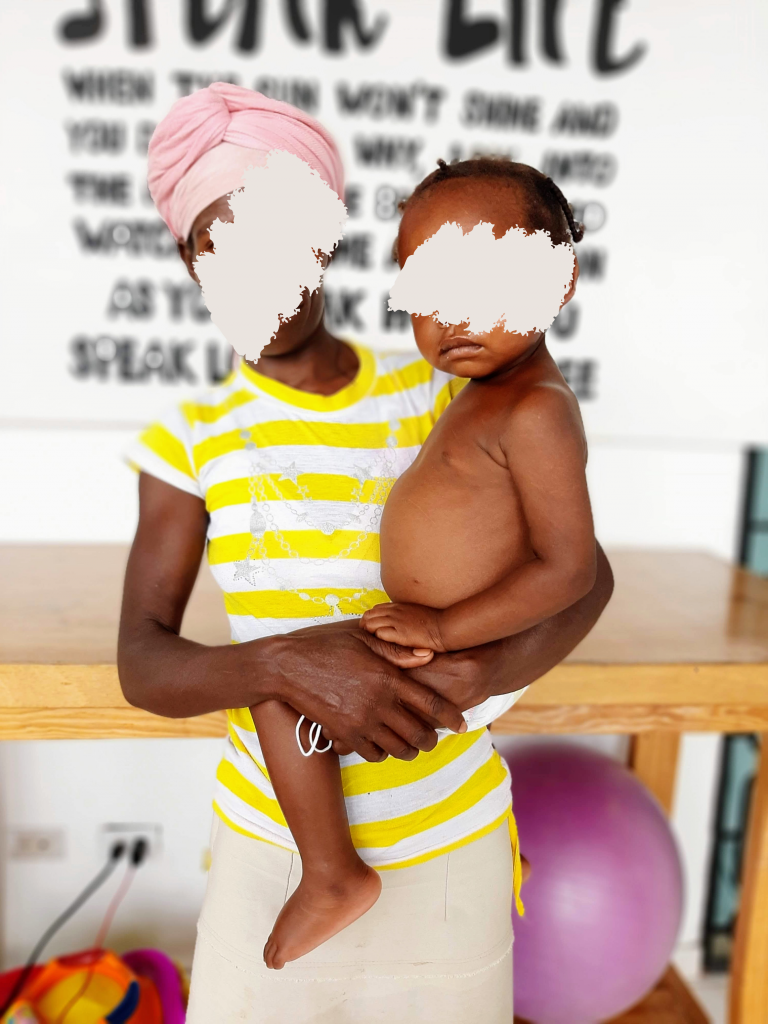 On the 25th of September, 17-day-old “C” became our 2nd baby under 4lbs admitted for the month. She was brought to us by her mama Roseline. They traveled about 15 minutes by motorcycle taxi to arrive at Middle Ground. C had been born prematurely and has some congenital disabilities that affect her limbs. Rosemene had been trying to breastfeed C, but because she was so tiny and weak, she couldn’t take in the amount of milk she needed to grow. We are thankful to offer breastfeeding support to Rosemene until C is strong enough to return home. 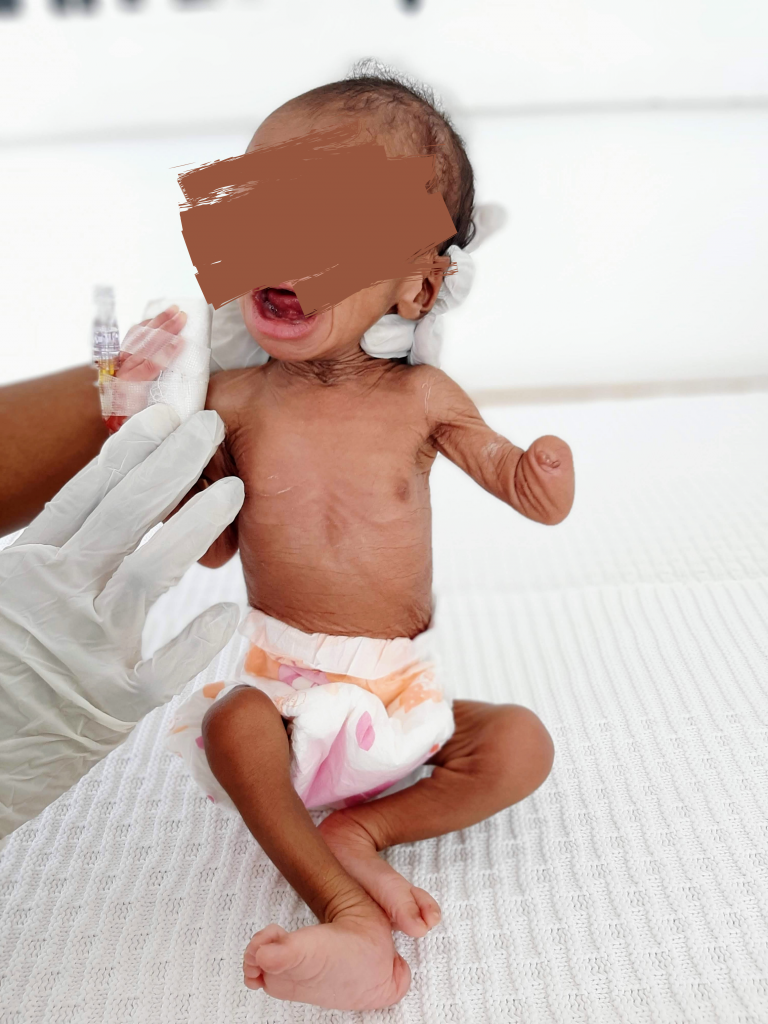 September 29th was a busy day, with our final three admissions of the month. The first, 2-year-old “R” who weighed 17lbs 8oz. R was diagnosed with kwashiorkor. R is the youngest of his mama, Jesula 3 children. When R was admitted, he had been sick for about two weeks with a fever. The day before he made the 90-minute journey from his home to Middle Ground, he had not had anything to eat. The day before, he had rice with bean sauce. While R’s body heals, Jesula will participate in many hours of education classes that will empower her to know how to care for her children in a way that will allow them all to thrive. 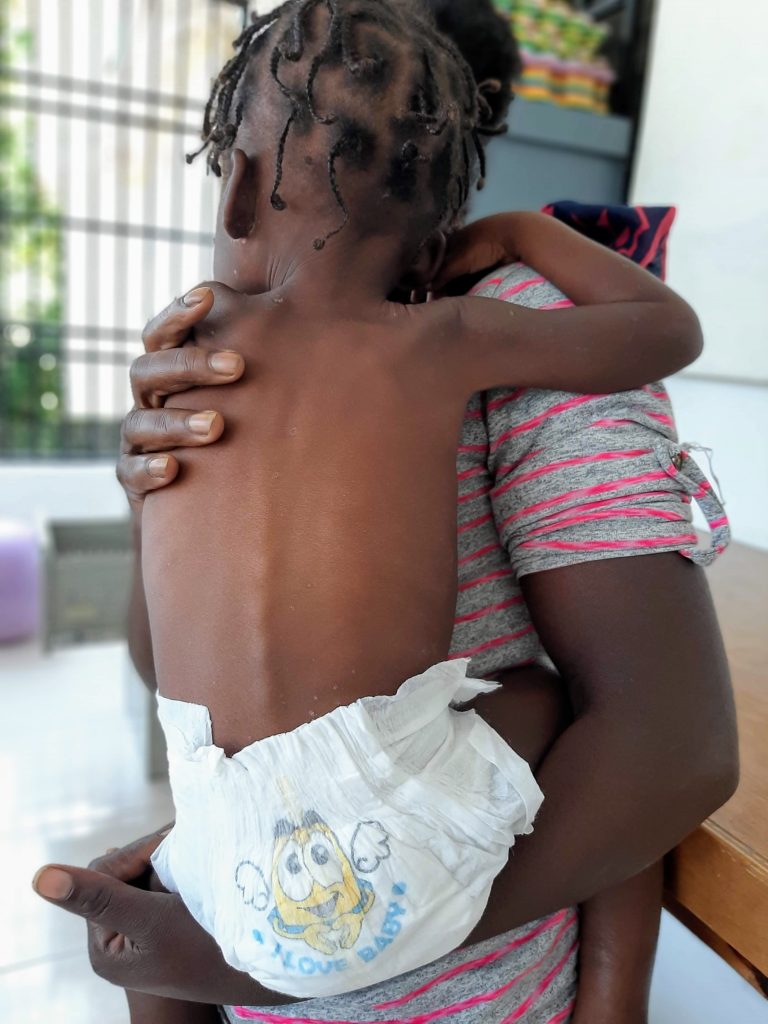 Later in the same day, 2-year-old “B” arrived at Middle Ground in the arms of his mama, Armonise. He weighed 20lbs 1oz and was suffering from marasmus. Armonise had brought B on the 1-hour journey to Middle Ground at the urging of a neighbor who recognized his severe malnutrition and told them about the center. On the day that B was admitted had a bowl of broth. B is the youngest of Armonise’s two children. 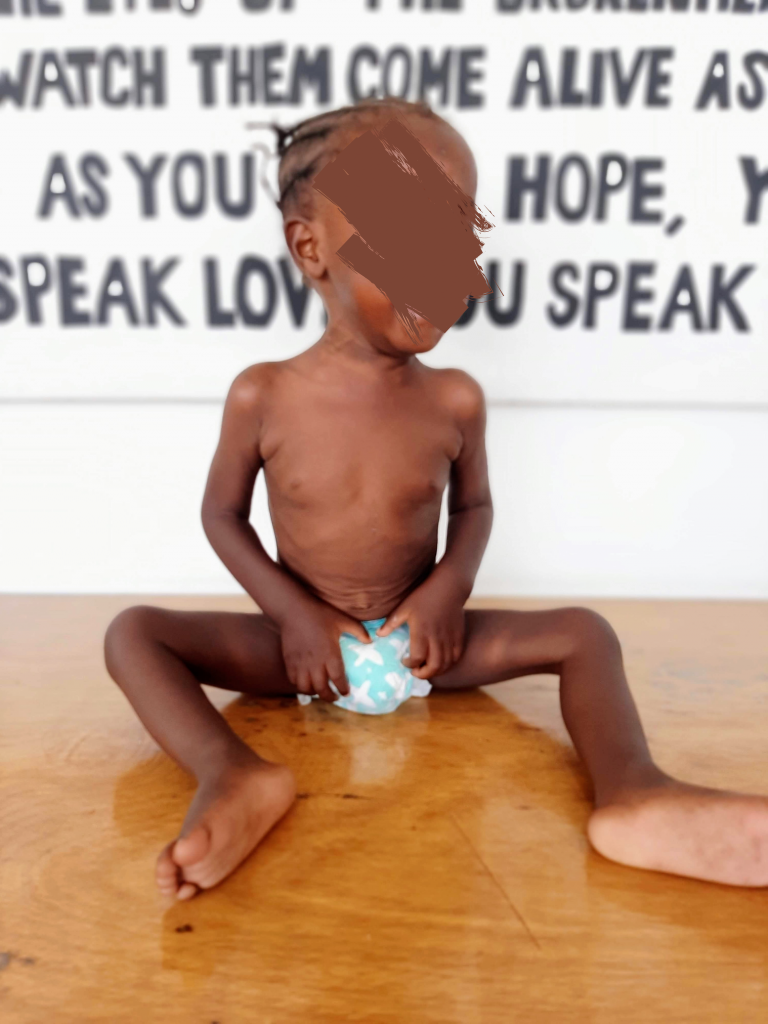 Finally, on the afternoon of the 29th, we admitted our last patient of the month, another “older” child, six-year-old “L”. L is the middle of 3 children, and her mama Ismoléne traveled to us from an area less than a mile from our property. On the day she was admitted, L had been sick for about two months with headaches and digestive issues. She weighed 29lbs. The day before L was admitted, she ate a plate of rice and bean sauce. L’s family was told about Middle Ground by a neighbor, who’s child had been treated for malnutrition through our programs. 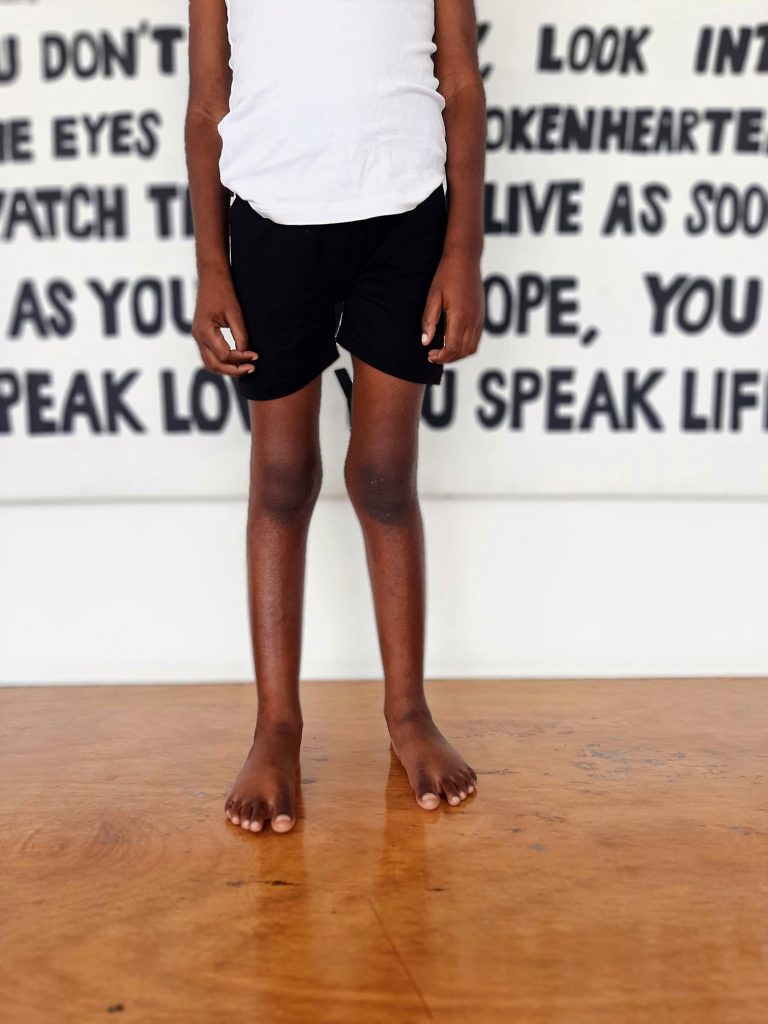 Please pray with us for all of these children, and especially for Merline’s mama, Roseline, and the rest of their family as they grieve the loss of their precious little girl.

The lifesaving care that we offer at Middle Ground is only possible because of the support of partners like you. Consider giving a gift today to help us care for these hungry little ones.

BE THE FIRST TO KNOW

Get exclusive updates on our work and how you can help.