Today I want to introduce you to the 5 little ones who joined us at Middle Ground this past month. Each of these sweet babies (and their mamas) are fighting through the treacherous early days of malnutrition treatment. They don’t feel well, and they are scared. The next few days and weeks will be filled with a range of complicated physical and emotional feelings from everyone as the pain starts to give way to healing.

On the 1st of July 4 month old “G” was brought to Middle Ground by his mama Nathalie, they had been referred to us by the landlord of our previous property. On the day he was admitted he weighed 12lbs 6oz and had a horrible case of infected scabies. G had been born very small and never thrived enough to catch up to the size he was supposed to be. Baby G and his mama are receiving breastfeeding support during their time at Middle Ground, we also believe that the parent education classes will be very helpful in making sure that Nathalie and G both thrive once they return home. 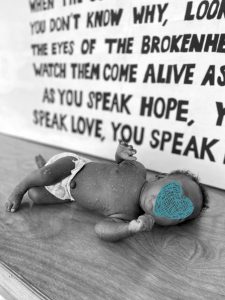 On July 17th one of our drivers contacted our nurses about a child he had seen several hours away. He advocated to our medical staff that this child was malnourished and needed care. We gave the go-ahead for him to bring 18 month old”C” and his mama Anaelle to the center. When they arrived we were so proud of Dorian for recognizing the symptoms in little C has he was indeed severely malnourished weighing just 10lbs 4oz. C has other special needs that make his recovery from malnutrition complicated but he began to recover quickly on F75 formula before transitioning to Medika Mamba. 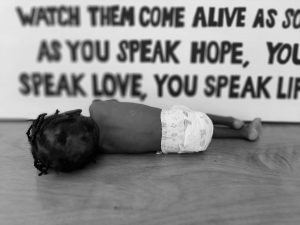 18 month old “S” was admitted into our inpatient unit on July 22nd with her mother Tamara. S had been sick for about a month when the mother of one of our previous patients saw her and told her mother to bring her to Middle Ground. On the day of her admission S weighed 17lbs 14oz, she was diagnosed with marasmus malnutrition and started on F75 formula. S was also suffering from a respiratory infection, which is very common among children with malnutrition.  After several days of antibiotic treatment, the infection began to heal and S was able to graduate from F75 to Medika Mamba. 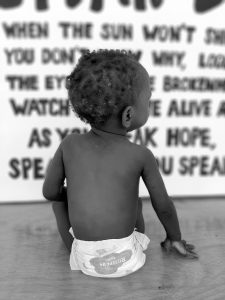 On July 22nd baby “C” and his mother Mirlande were referred to Middle Ground by the parent of a child who was treated in our programs in 2017.  Upon their arrival, it was clear that C was quite sick, and he was quickly admitted into our inpatient treatment unit. On the day of his admission, C was 2 months old and weighed 9lbs 9oz. He was swollen with kwashiorkor, an already dangerous condition made much more critical because of C’s young age. After a very touchy first few days, C thankfully turned a corner and his swelling started to diminish. Today C and Mirlande are working hard on establishing a strong breastfeeding relationship so that when they go home Mirlande will know exactly how to feed her baby in order for him to grow and develop. 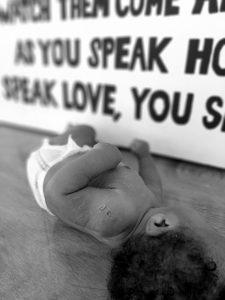 Finally, also admitted on July 22 was 11 month old “W”. W and his mother Alexandra were referred to Middle Ground by the parent of a previous patient. This woman had been urging Alexandra to bring W for treatment for several days but unfortunately, it took him getting critically swollen before she realized just how sick her son was. Upon admission, W weighed 12lbs 9oz with significant swelling/water weight. The first several days of treatment were very rough for W and we prayed hard that he would pull through a few times. Today he is still a very sick little boy but on a diet of F75 milk, he is slowly starting to recover. 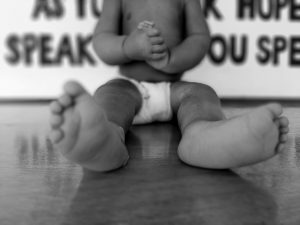 Will you join me as I  pray for Nathalie, Anaelle, Tamara, Mirlande and Alexandria and their little ones “G”, “C”, “S” “C” and “W”. Pray that these babies would find strength and health during their journey with us, and pray that these mama’s would learn to embrace the strength that is inside of them to care for and protect their children.