Nonley was admitted into the recovery center on September 13th 2016, when he was 18 months old. He was suffering from Kwashiorkor (swelling) malnutrition. On admission he was 26lbs 2oz, but once he lost his water weight from swelling, he weighed just 21lbs.

When he first arrived, Nonley had to have a feeding tube because he had no appetite and refused to eat. After a few days Nonley finally began eating on his own again, and quickly after that, he got well.

In just 29 days Nonley went from incredibly sick to healthy and rambunctious. He and his grandmother, Cilien (who had stayed with him during his treatment), traveled the 4 hour journey back to their home and showed everyone the miracle that Nonley experienced during his healing process. 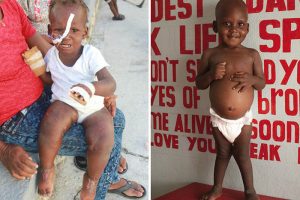 After they returned home, Nonley continued to thrive and his grandma was incredibly faithful in his follow up care. A few months later we launched our small business program and Nonley’s grandma, Cilien, was the first caregiver to receive a business loan from Middle Ground. Now almost 2 years later, Cilien has a very successful business selling in their local market and has even recently expanded her business to also sell solar lights. Now Cilien is providing for her entire family. Nonley and all of his siblings and cousins are in school for the first time and the family is able to eat enough to sustain all of them!

Nonely’s entire family had their future changed as a result of just 29 days in the care of Middle Ground.