95 days ago, a man walked through our yard with a tiny bundle in his hands. He was weary from the 5 hour journey that brought him to our emergency room, and the days that had led up to his journey. Just two days before setting out on his way to us, he buried his young wife. In his arms he carried his 4 day old, 3lb son.

Upon their arrival I quickly unwrapped the bunches of towels to reveal a small, pale baby who was cold to the touch. He was floppy and unresponsive but he was breathing and his heart was strong. Our medical staff worked quickly to start an IV into his tiny veins and get him on warming pads and under heat lamps.

As the baby began to warm up his father sat next to his bed and whispered his story. A mother, a complicated delivery in a simple thatched roof home, a tiny body crashed onto this side of earth at the same time that another slipped silently away. There was no formally trained midwife to help, a local birth attendant was present but when the blood started flowing too fast there was no medicine to stop it, and no bags of blood to transfuse. In a mater of moments she was gone.

Dorlegeune became a widower that day, the sole provider for a tiny premature boy. As a first-time father with no idea how to care for a baby and no milk to feed him, Dorlegeune turned to the women in his neighborhood for help. One of those women told him of a place that she had found when her son was on the brink of death 6 months before. She urged him to bring his baby to us, and she accompanied him on the journey from their home, far in the rural mountains, to the recovery center.

When he finished telling his tale, he was tired. He sat back in his chair and sipped the hot cup of coffee that had been pressed into his hands. Next to him on the warming bed his little boy finally let out a squawking cry. We all stood silent for a few moments, soaking in the sacredness of his story and the moment that we had all been invited to witness.

Our nurses asked the baby’s name and a weary, Dorlegeune responded that he had not been given one yet. He turned to me and asked me if I would choose a name for his son. This is something I have been asked to do on several occasions and it is a request I do not take lightly. I knew that he was giving me a great honor and in respect of that I thought carefully. After a few moments I asked him what he thought of the name Beni. In Creole Beni means “blessing.” Our entire staff gathered around and spoke life and hope over this little boy and his father. We all knew that though his beginning was hard, his life was a beautiful blessing. His father agreed to the name, and that day Beni was admitted into our NICU. 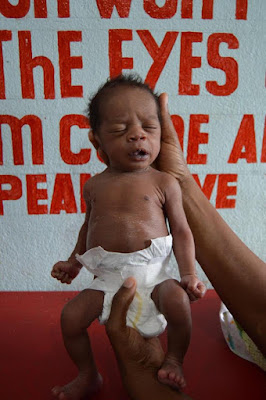 Over the next several weeks, baby Beni began to grow. His little personality started to take over our tiny NICU, and everyone who came in the room was enthralled by him. He was gorgeous with clear, bright eyes and an easy smile. He was rarely in his bed, preferring to be snuggled in the arms of his daddy, or his favorite nanny, Alexandra. Under their care Beni blossomed, and before long, that tiny little baby passed 5lbs, and then 7lbs until finally he weighed in at 9lbs 8oz. We knew that Dorlegeune was ready to take Beni home. He was bathed and dressed in a new outfit, passed around to everyone for one last kiss and sent home with an appointment for a follow up visit 10 days later. We were all thrilled as we watched them walk away. 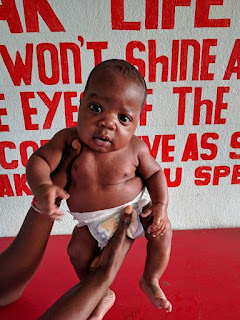 Another success story for the books, another family leaving with hope in their steps.

2 weeks passed, and Beni missed his formula appointment. We were concerned and tried calling Dorlegeune but couldn’t reach him. We worried and waited to hear from them. A few days later the woman who had brought Beni and Dorlegeune to the center came with heartbreaking news… Beni had become suddenly sick this past Sunday. His daddy quickly set out with him to find help but before they could make it from their rural area, little Beni passed away.

I can’t wrap this story up in a pretty package.

I can’t spin it to find beauty.

While I get to see a lot of happy endings, the reality is that a lot of times babies that I love dearly, die. And a lot of times, there seems to be no reason for the suffering that they experience.

I like to think that Dorlegeune found some peace during the time he spent with us. His story took a turn that no one expected, and we are all devastated with him. But I hope that in the fog of devastation he remembers the words of Truth that he heard spoken inside of our walls. I hope that while he grieves his son, he finds some comfort in knowing that people were willing to fight for Beni, and believes that his little baby was a precious blessing.